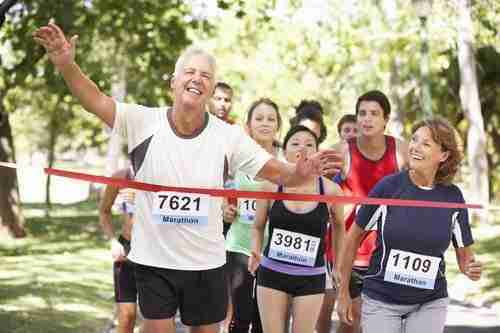 What Happens To Endurance As We Age?

Like muscles & bone mass, endurance declines as we age. Read on how age impacts endurance, what muscles are more prone to fatigue and how to control & even reverse effects of aging on endurance.

According to Dr. Susan Fu, Rehabilitation Services Director at Providence Saint John’s Health Center: Aging can cause a deterioration of 5 % in performance (endurance) per decade after 45. He explained further: Our skeletal muscles comprised of 2 types of muscles – Type 1 (called as slow twitch fibers) and Type 2 (called as fast twitch fibers). As per a research study conducted by National Library of Medicine (NIH), it was shown that both types of fibers deteriorate with age. However, it was found there was a greater degeneration of the Type 2 fibers.

And the decreased maximal heart rate reduces both oxygen delivery to the working muscles & cardiac output, which in turn lower VO2max – leading to reduced endurance with age. (Source)

In addition, the muscle mass declining with age also contributes to decrease in endurance as well.

The gradual decline in endurance, strength, and flexibility with age happens for both men and women. The loss of endurance, in turn, causes a decrease in tolerance and performance of the fitness abilities as we age.

Why Preserving Endurance Is Important As We Age?

In one extensive research study, more than 3,000 elderly men and women (age between 70 to 79) participated. This study examined the correlation between the speed at which these participants walked ¼ of a mile and their risk of mobility limitation, cardiovascular disease and premature mortality. It was found that the subjects with the slowest walk times (>6 minutes) had a greater risk of death, cardiovascular disease, and mobility limitation as compared to those who walked the same distance in less than 4 ½ minutes. Further, it was also shown that every additional minute of walking time was linked with greater and greater degrees of risk. In fact about 13% of the subjects could not even complete the distance because of lacking endurance, such as fatigue or other symptoms like breathlessness, cramping, etc.

With age smaller muscle groups are most vulnerable to fatigue. The bigger muscle groups such as glutes, and in fact anything in our posterior chain lose muscles at slower rate. But, some muscles in our upper body such as triceps, delts, and rhomboids are prone to atrophy (muscle loss). This causes posture issues as we age.

Why Our Posterior Chain Is Very Important

Do you know our posture directly affects oxygen flow & also impacts endurance. As we age, the upper spine (area surrounding lungs), generally changes in shape – leading to increased upper back curve. The upper back generally increases in curve by 10 degrees by the time we reach age 60. Moreover, all our spinal ligaments generally become rigid as we age. In fact, they lose the elasticity. This combination of spinal shapelessness and ligament stiffness has been shown to reduce our lung capacity, which in turn has negative effect on our endurance and strength.

Symptoms Of Slowing Down Of Endurance

Signs of lower endurance start appearing in apparently small ways as you age. For instance, you may start to notice that now you are unable to walk or jog as much as you used to. Or you may feel that activities such as doing housework, gardening or playing with young family members have become more challenging.

How Can You Retain Or Increase Endurance With Age?

Fortunately, here’s good news. In one Honolulu Heart Program research study conducted for examining walking and mortality relationship, 700 men participated. It was shown that the mortality rate among the subjects who walked less than 1 mile a day day was nearly two times than the rate who walked more than 2 miles a day. Studies on women revealed similar results.

What These Research Studies Mean?

Both strength training and cardio can help maintain & recover endurance/stamina. A 2014 study found strength training to be an effective way to improve performance output along with increased muscle mass & enhanced muscle strength. It particularly helped when performed twice per week at moderate- to high-intensity for about 25-40 minutes. Moreover, aerobic exercise like walking or cycling reduces our bodies resting heart rates. It lowers blood pressure and improves our heart’s ability to transport oxygenated blood to our muscles (Source).

An encouraging fact is that older folks bodies have the same capability to respond to endurance and strength training as young people in their 20s & 30s. Strength & endurance training in the aging skeletal system have an intense positive impact to bring changes in the body lean muscle mass, fat and cardiovascular fitness. Furthermore, endurance training can slow down, improve or even partially reverse age-related physiological changes. And offsets the risks of obesity, back pain, heart disease, osteoporosis and cancer. That is not all, an active lifestyle improves quality of our life and helps us age gracefully.

Tips To Maintain Endurance As You Age!

To maintain or recover endurance fitness levels, one should follow a regular exercise routine and maintain healthy weight.

Many people tend to take an excuse, oh…. I am too old; I am too busy; I have to manage my job & family, or doing exercises is thing of the past!

“I’m old” is the common excuse for the seniors to refrain themselves from doing the exercises.

We, especially the seniors should train (exercise/workout) smarter, not harder. This will not only minimize the effects of aging, but also cut down the chances of injuries and at the same time maximize the gains.

And the last, but not the least: AS the older people take longer to recover, so they need to plan their workout schedule in accordance with the changing age and their fitness levels.

How To Maintain/ Increase Flexibility In Old Age With 3 Steps