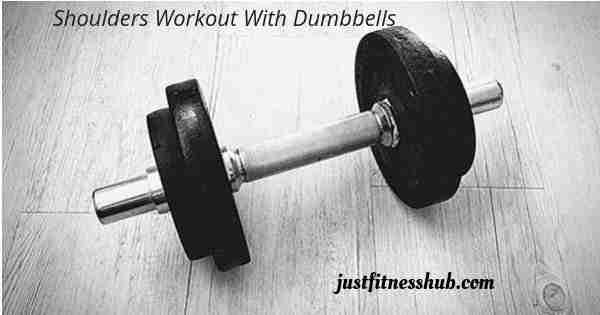 A set of well-sculpted shoulder muscles provides width to the upper body, and contributes to the ‘V-taper physique’, which most of the men desire. Robust shoulders are not only important in terms of aesthetics and proportion on a physique, but they also play a critical role in most upper-body movements and for stabilizing your chest during exercises like push-ups and bench presses.  Moreover, athletes need to regularly include shoulder exercises in their strength and conditioning programs, not just to build “cannonball shoulders,” but also to improve performance.

If you are strapped for time or lack gym access, don’t worry. We will tell you the way to build big, stronger shoulders with just a pair of dumbbells. Dumbbells are the perfect tool for the job. While barbell moves often require a spotter, and most machines fix your movement in one plane of motion, dumbbells require all your stabilizer muscles to work, force your core to hold everything together and offer plenty of versatility with every exercise.

In fact, lately I have started using dumbbells to workout all my body parts including chest, shoulder, bicep, tricep, legs and back exercises.

This is my fifth post on “Home Gym With Only two Equipment”. I have started writing this series on dumbbells workout because they’re fairly inexpensive, compact, allow you to tone every part of your body and easy to use even at home.

Click here to read my first five posts already published in this series:

(ii) Working Out Biceps With Dumbbells At Home

With dumbbells we can target all the three deltoids from multiple angles and activate all three heads of the deltoid muscle. Our training program starts with the weaker rear deltoids and finishes by hitting all three in one big-hitting lift even Arnold Schwarzenegger would be proud of.

Due to your shoulders’ wide range of mobility, dumbbells are the best way to train them.

Do 10 to 15 reps and 3 sets of all the following exercises, with about 60-90 seconds of rest between each set.

Note: If you are a beginner or doing it after a long gap or feel not strong enough – start with lower number of reps and fewer sets.

Make sure to stick to correct form throughout the exercises and don’t overdo it. Most shoulder injuries occur in the deltoids as a result of poor technique or overuse. 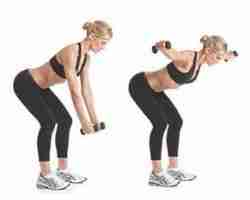 The rear deltoids are the weakest muscles in the shoulders so it’s best to start with them when you’ve got the most energy. The bent-over lateral raise, also known as Bent Over Dumbbell Rear Delt Raise, is an isolating exercise that targets the rear deltoid head and develops strength and density throughout the shoulder region.

(i) Stand up straight while holding a dumbbell in each hand.

(ii) While keeping your back straight and maintaining the natural arch of your back, lean forward until your torso is nearly parallel to the floor. Allow your arms to hang in front of you perpendicular to the ground. The palms of your hands should be facing each other. This will be your starting position.

(iii) Keeping your torso forward and stationary, and the arms straight with a slight bend at the elbows, raise the dumbbells straight to the side until both arms are parallel to the floor.

(iv) Pause for a second at the top, and then slowly return the dumbbells back to the starting position.

(v) Repeat for the desired number of repetitions.

(a) Make sure to contract the shoulder blades together at top of movement.

(b) Keep the upper torso stationary as you lift weights to the sides of upper body.

Note: Don’t use momentum from your legs or hips, as you’ll be shifting the tension away from your rear deltoids and rendering this exercise useless. Reduce the weight rather than giving your muscles extra help because this muscle is not designed for lifting huge weights.

Variation: Lie on an incline bench while doing the exercise. 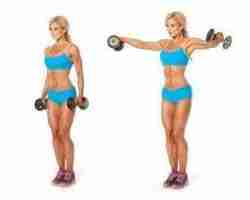 Although, this involves a similar movement but by standing upright the focus gets shifted to the medial deltoids, the middle muscles of the shoulder – also known as Lateral head of the Deltoids.

(i) Pick a pair of preferred dumbbell weight. Stand with a straight torso, tightening your core and head up straight. Let the dumbbells hang by your sides at arms length with the palms of the hands facing you. This will be your starting position.

(ii) While maintaining the torso in a stationary position (no swinging), raise the dumbbells to your side with a slight bend on the elbow and the hands slightly tilted forward as if pouring water in a glass. Using minimum momentum as possible and leading the movement with your elbow, continue to go up until you arms are parallel to the floor. Pause for a second at the top of the movement, squeezing the contraction.

(iii) Lower the dumbbells back down slowly to the starting position.

Note: Avoid hulking the dumbbells up, rushing through a set and strutting off smugly after dumping the weights on the floor five reps in. That’s missing the point entirely. Instead make sure to go light, go slow and keep your body upright and neck relaxed so you don’t shift the emphasis onto your traps. 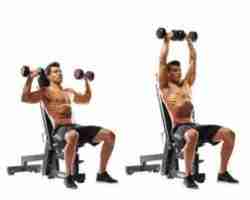 It is a compound exercise that targets the anterior head of the Deltoid and the Triceps. When it comes to choosing which press you wish to perform – standing or seated – it simply depends on whether you have an adjustable exercise bench at home or your preference. Here we are providing a step-by-step guide on the seated version.

(i) Pick up preferred dumbbell weight and hold in each hand using an overhand grip, keeping the torso tight. Sit on a military press bench or utility bench that has back support. (if you’re doing seated version, place the dumbbells upright on top of your thighs.)

(ii) Now raise the dumbbells to shoulder height one at a time using your thighs to help propel them up into position (this step is for seated version).

(iii) Make sure to rotate your wrists so that the palms of your hands are facing forward. This is your starting position.

(iv) Raise the dumbbells towards the ceiling, with palms facing forwards, until they touch at the top.

(v) After a brief pause at the top contracted position, slowly lower the weights back down to the starting position. That completes one rep.

(vi) Repeat for the desired number of repetitions.

Variations: You can perform the exercise standing or sitting on a regular flat bench. For people with lower back problems, the version described above using a flat or adjustable bench with back support is the recommended one.

You can also perform the exercise as Arnold Schwarzenegger used to do it, which is to start holding the dumbbells with a supinated grip (palms facing you) in front of your shoulders. Then as you begin raising up, you align the dumbbells by rotating your wrists so that your palms face forward at the top of the motion, touching the dumbbells at the top. As you come down, then you would go back to the starting position by rotating the wrist throughout the lowering portion until the palms of your hands are facing you. This variation is called the Arnold Press. However, it is not recommended if you have rotator cuff problems. 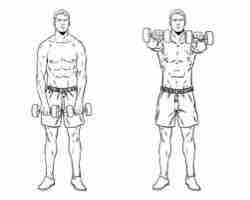 This exercise targets the Anterior Deltoid.

(i) Pick a pair of dumbbells and stand upright, with a straight torso and position the dumbbells on front of your thighs at arms length with the palms of the hand facing your thighs. This will be your starting position.

(ii) While maintaining the torso stationary (no swinging), raise the dumbbells to the front with a slight bend on the elbow and the palms of the hands always facing down. Continue to go up until you arms are slightly above parallel to the floor. Pause for a second at the top.

(iii) After holding the contraction for a moment, begin to slowly lower the weight back to the starting position.

Variation: You can perform this exercise by alternating hands, meaning doing one repetition with the one arm, and then one with the other arm.

(i) I suggest performing this exercise using one arm at a time, in order to solely focus the muscle that is being worked. 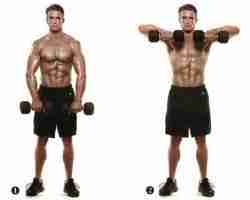 The dumbbell upright row is a compound exercise that targets all 3 heads of the Deltoids and traps muscles, while increasing mobility throughout the shoulder complex. This is a good upper back strengthening protocol and can be considered a ‘finisher’ exercise in a shoulder workout.

The advantage that the Dumbbell Upright Row has over the Barbell Upright Row is the free range of motion that Dumbbells allow for. This can prove very useful in preventing injury to the shoulder joint.

(i) Grasp a preferred dumbbell weight in each hand using an overhand grip. Dumbbells should be positioned just inside shoulder width, with palms facing the body, whilst the body should remain upright, tight. Your arms should be fully extended with a slight bend at the elbows. This will be your starting position.

(ii) Keeping the weights as close to your body as possible throughout the entire movement, pull the dumbbells up toward your chest. Your elbows should remain flared out during the movement and drive the upward motion

(iii) Continue to lift them until they nearly touch your chin. Pause for 1-2 seconds, and then lower the dumbbells back slowly to the starting position. If this is too difficult, pick up a lower dumbbell set.

(i) Don’t go too heavy on this exercise, as it’s important to use correct form to prevent shoulder injury. I’ve seen this happening many times so please no jerking, swinging and cheating.

(ii) Also, if you suffer from shoulder problems, you may want to stay away from upright rows and do by some form of lateral-orientated exercises.

(i) Avoid using momentum to move through the exercise.

(ii) Avoid allowing the weight to move away from the body. Instead, keep the weight close to the body throughout the exercise. 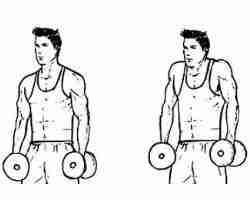 Although the upper traps muscle is on your back, but it is involved in a large number of shoulder exercises, so working on them directly towards the end of a shoulder workout routine may be a good idea – especially if they are a lagging body part of yours.

(i) Stand erect with a dumbbell in each hand (palms facing your torso), arms extended straight on the sides all throughout the movement.

(ii) Lift the dumbbells by raising the shoulders as high as possible. Hold the contraction at the top for a second.

Note: The arms should remain extended at all times. Avoid using biceps to help lift the dumbbells. Only the shoulders should be moving up and down.

(iii) Lower the dumbbells back to the original position.

Tip: Raise the Dumbbells using strictly your Traps, using no bend in the elbow.