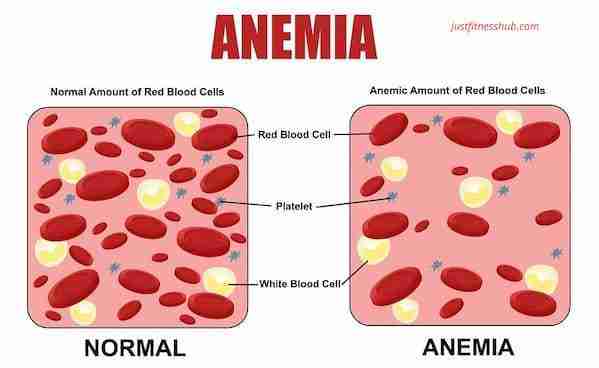 Why Your Body Needs Iron?

Your body requires iron, an essential mineral, to help perform various vital functions properly – like production of energy in your body, synthesis of hormones, growth and development. Iron also helps in maintaining your immune system healthy.

About 65% of iron in your body is present in the hemoglobin. Hemoglobin is a protein in your red blood cells. It is responsible for transporting oxygen to the cells. Some amount of iron is also found in myoglobin. It’s a protein present in muscle tissues. Myoglobin supplies oxygen to your muscles and provides energy during physical activity.

So, it’s really important to include enough amounts of iron in your daily diet.

What Is Iron Deficiency Anemia?

Iron deficiency anemia is a common type of anemia. It’s condition, in which blood doesn’t have sufficient amount of healthy red blood cells. With the result to your body’s tissues will not get adequate amount of oxygen.

As is obvious from the name, iron deficiency anemia occurs because of insufficient iron in your body. Due to inadequacy of iron component, your body is unable to produce enough amount of a substance, called hemoglobin. Hemoglobin is a part of red blood cells, and provides red color to your blood. Hemoglobin ensures supply of oxygen throughout your body cells. As a result, iron deficiency can leave you short of breath and tired.

If we aren’t taking adequate iron, or if we’re losing too much iron, our bodies are not able to produce enough hemoglobin, and so iron deficiency anemia will develop over time.

Causes of iron deficiency include:

(i) Blood Loss: Blood has iron component within red blood cells. So if we lose blood, we lose some iron as well. For example, women with heavy periods are at risk of iron deficiency because of the blood loss during menstruation.

Other examples are: Slow, chronic blood loss within the body — like from a hiatal hernia, a peptic ulcer, a colon polyp or colorectal cancer. Gastrointestinal bleeding can occur from regular dose of some over-the-counter pain relievers, particularly aspirin.

(ii) Lack of iron in your diet: Your body gets iron from the foods that we eat. If our iron intake is not adequate, our bodies can become iron deficient over time.

A few examples of foods high in iron are meat, eggs, leafy green vegetables and iron-fortified foods. For proper growth and development, infants and children require iron from their diets, too.

(iv) Pregnancy: During pregnancy, women need iron not only for their own bodies, but also for the growing fetus. So without iron supplementation, iron deficiency anemia is likely to occur in many pregnant women.

[Read on: How To Get More Vitamin D From Sun]

(i) Women: Women lose blood during menstruation, so women in general are at increased risk of iron deficiency anemia.

(iv) Those who suffer from gastrointestinal disorders

(vi) Vegetarians and Vegans – if they don’t eat other iron-rich foods.

(vii) Those who donate blood frequently since blood donation is likely to can deplete iron stores. Low hemoglobin relating to blood donation is a temporary problem, which can be alleviated by eating more iron-rich foods.

(viii) Infants and Children: Children need more iron during their growth spurts. If a child isn’t eating a healthy, balanced diet, he or she may be at greater risk of anemia.

Also Infants, especially those who were born prematurely or lower weight at the time of birth or who don’t get enough iron from breast milk or formula may be at increased risk of iron deficiency.

Note: For the people who are iron deficient or are at the higher risk of iron deficiency, I will be writing an article about how to increase their iron levels. Please watch out for my next article.

At the outset, iron deficiency anemia can be so mild that you may not notice it. But as your body becomes more iron deficient- anemia condition worsens, the symptoms and signs intensify.

Iron deficiency anemia symptoms and signs may include:

[Read on: How To Get Protein For Vegetarians]

If you are iron deficient, consider adding these iron rich foods in your daily diet, as per your choice:

Foods that are rich in heme and non-heme iron include:

Dark-green leafy vegetables are an excellent source of iron, including:

Watch this video to learn everything you need to know about Vitamin B12:

Personal Fitness Trainer Course, Nutrition Health Coach course & Specialist Exercise Therapy course from ISSA, USA obtaining + 97% marks. He shares his experience and knowledge about nutrition and effective workouts to get you in the best shape of your life, no matter how old you may be. The author says: “For me age is just a number!”