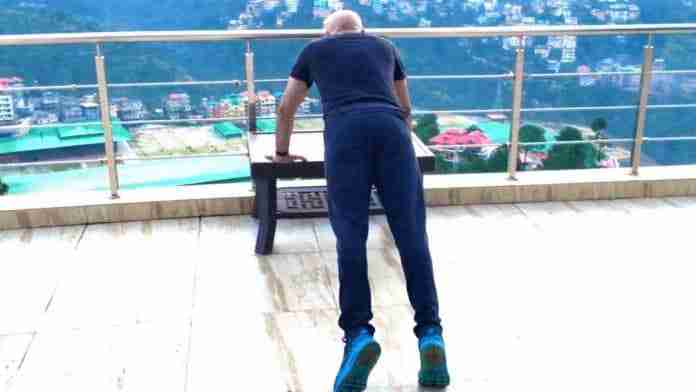 In this article you will learn about the key benefits of HIIT for Seniors (over 60, 65, 70) & how to do HIIT workouts for seniors safely.

For many people, hiit (high intensity interval training) is for the young. When the old people hear the term high intensity interval training first time, they generally get intimidated. But, many health & fitness professionals differ and are in favor of including High Intensity Interval Training (HIIT) in the fitness programs for people at all ages — especially for adults at 50, and 60 or beyond that.

Let us first understand what is HIIT?

HIIT is a form of workout that involves a series of intense work and rest (or low intensity) periods.

(i) You don’t need to hit a target of 80% to 95% of your peak heart rate. For an older adult/senior citizen, HIIT is simply a workout session that alternates between short bouts of very intense exercise and equally short (or even longer) rest periods with intensity adjusted according to his or her fitness level.

(ii) The rest periods in HIIT training don’t mean sitting down. Here the “rest” means engaging in physical activities, which are performed at 40 to 50% of the maximum heart rate – a physical activity level during which one can carry on a conversation.

(iii) Always perform an HIIT workout with a 5 to10 minutes warm-up and cool down period.

Benefits of HIIT for Seniors

As you age, your muscles health decline at the cellular level. This damage is more severe in the seniors because the muscles in old people become weaker and do not regenerate easily. This explains why the seniors produce less energy, and diminish in their vigour.

Thanks to one experiment study conducted by researchers at the Mayo Clinic, we now know how high-intensity workouts benefit seniors at muscular level.

This study was conducted over 12 weeks, which included 72 healthy but sedentary men and women who were 30 or younger or older than 64. Some of these subjects performed HIIT-style training, some did moderately paced activity, and the others did not exercise.

The results revealed that the participants who did the HIIT-form of training experienced improvements in their health at the cellular level – mitochondria. Mitochondria are responsible for producing energy within cells. Good news is that the impact was particularly more pronounced among the seniors.

It was found that the older people’s cells responded in some ways more vigorously to intense workouts than the cells of the young did.

Dr. Sreekumaran Nair, a professor of medicine and an endocrinologist at the Mayo Clinic and the study’s senior author says that it is never too late to benefit from exercise.

A sad effect of aging is some memory loss. Fortunately, by including HIIT into your fitness regime, you can get a memory boost.

As per to another study reported in the Journal of Cognitive Neuroscience, as little as 6 weeks of HIIT (performed for twenty minutes at a time) enhanced the 95 participants’ recall skills. Particularly, it was shown that high intensity training enhanced their high-interference memory.

This happens due to an increase in the protein intake that helps in growth of brain cells. This is not only critical for memory when you are young, but for the future also, because long-term memory wanes with age.

According to a research study, the lead author Jennifer Heisz, Ph.D said: “One hypothesis is that we will see greater benefits for older adults, given that this type of memory declines with age. As we reach our senior years, we might expect to see even greater benefits in individuals with memory impairment brought on by conditions such as dementia.”

Similarly, High Intensity Interval Training is a great workout for your lungs. A study published in Cell Metabolism reported that putting your body through intense exercise for a short period, then allowing it to recover, and then repeating this process again for a few times can improve both respiratory & cardiovascular health in older adults. Good news is that the over-65 group particularly gained an impressive 69 percent increase in their capability to take in oxygen.

Exercising both your heart and lungs is an effective way to improve your overall aerobic capacity – that is the capability of your lungs & heart to get oxygen to your muscles. This is particularly important for those who’ve had a stroke. (About 3/4th of strokes happen in those above the age of 65.)

Managing diabetes (blood sugar levels) in seniors can be a difficult task, but HIIT can help manage this metabolic disease. A study from Denmark showed that the participants who did twelve weeks of High Intensity Intervals Training experienced more regulated glucose levels (also called as blood sugar levels).

This was found to be more effective than other modes of moderate exercise, such as walking, even if they burned the same amount of calories. Another study from the University of Turku in Finland corroborated this finding.

Parkinson’s disease is another unfortunate side effect of aging. It’s a neurodegenerative disorder that affects older people movements and may even cause tremors.

HIIT may also help alleviate the Parkinson’s disease effects. A Research found that the muscle rigidity in Parkinson’s sufferers was significantly eased after doing HIIT for eight weeks.

The major concern with high-intensity interval training is that it involves a lot of high intensity.

Good news is, researchers have discovered enough evidence that slightly decreasing the intensity of the HIIT won’t deprive you of its great benefits. And when it comes to doing it, the same basic safety guidelines apply universally, irrespective of the age.

In case of older adults, the important factors are the typical limitations that occur with age – slower recovery time, such as stiffer joints, or more fatigue, etc.

Read here for the HIIT Tips & Guidelines For The Seniors

The older adults need to prioritize their focus mainly on breathing and performing movements using correct form. While moving, keep focus on your speed. Perform at a pace that is challenging, and at the same time not too uncomfortable. While doing high intensity movements, you’ll observe elevated breathing & increased heart rate. Do not panic, simply take a 1to 2-minute break between exercises to allow both of these to return to normal.

Make sure, if you begin to feel any dizziness, nausea, or great pain, halt your workout immediately. Contact your doctor, if necessary.